Many first-time visitors to London need to tick off 'the sites'. These are those magnificent buidings and paces you've seen on film and TV, whether classic Brtish movies or like Darkest Hour or Netflix hits like the Crown and Peaky Blinders.

The Tower of London, our former fortress, palace and prison, is today home to our crown jewels. It's also where three queens of England were beheaded in the 16th century. Today the Tower is altogether more welcoming - and cared for by the Yeoman Warders - better known as the Beefeaters.

Westminster Abbey was built in 1066. It's been the place of marriage, burial and coronation of our monarchs for over 1,000 years. This is where our future king Prince William, the Duke of Sussex, married the Kate Middleton. It's where, in 1953, our Queen's coronation take place. Fans of the Crown will love Werstminster Abbey.

St Paul's Cathedral was built  - within 38 years -  by Sir Christopher Wren following the 1666 Great Fire of London. The funeral of Sir Winston Churchill was held here in 1965 and the wedding of the century was held here in 1982 - that of Prince Charles and the then Lady Diana Spencer.

Just thirty miles outside London is Windsor Castle. Built in the 11th-century, it remains the main home of the Queen and Prince Philip. Prince Harry and Meghan live just nearby, at Frogmore.

My guests love to visit the Cabinet War Rooms. Many come because the War Rooms played a staring role in the film Finest Hour.This secret bunker was where Winston Churchill's government and military chiefs conducted the war, until final victory in 1945. Unbelievably, the secret HQ remained untouched until the late 1970s. Retaining its timewarp condition, it became a brilliant visitor attraction in the early 1980s. 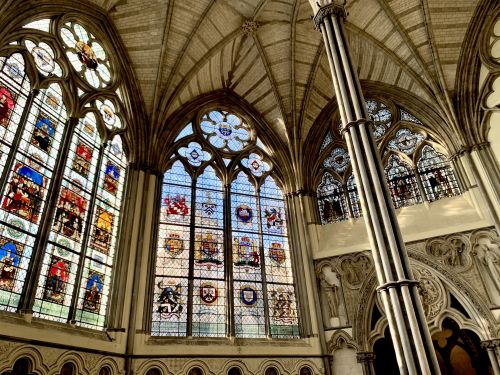